Editor’s Note: This short obituary and tribute to Alain Krivine was written for the GEN website by Michael Lowy at the request of the GEN International Members Meeting on the 13 March and I’m sure we would all like o be associated with it.

Alain Krivine,  well known French revolutionary leftist,  died on March 12 at the age of 80.   Born in 1941 in a family of Jewish immigrants who had fled the anti-semitic progroms in Ukraine (then part of the Czarist empire) ,  he became politicized in the late 1950’s,  in the movement against the French Colonial War in Algeria.   Expelled from the Communist Youth for  « Trotskyst deviation »,  he founded in 1966,  with a group of comrades, the Revolutionary Communist Youth,  which soon was to become an active component of the May 68 uprising.   Alain Krivine and his comrade Daniel Bensaid were among the main leaders of the student movement which  helped to ignite  this unique insurgent movement,  which led to a general strike of 10 million workers. 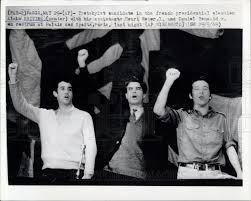 In 1969 he founded the Communist League,  French Section of the Fourth Internaitonal,  and was a Presidential candidate for the elections,  getting 1 percent of the vote.   He was twice imprisoned,  in 1969 and in 1973,  and in both occasions his organisation was dissolved by the government.  In 1973 he was one of the founders of the Revolutionary Communist League,  French Section of the Fourth International,  and from 1999 to 2004 he was a member  of the European Parliament.   In 2009 the LCR dissolved to become the New Anticapitalist Party,  where he remained active until his last days.

During all these years Alain Krivine was on  the first line in the anti-imperialist struggles,  workers strikes,  migrant mobilisations and  anti-fascist  movements.  He was one of the few among the leaders of May 68 who remained faithfull to his youthfull ideas,  to the struggle for socialism,  revolution and human emancipation.   His charm,  courage,  and mordant irony made him popular among the radical left.  He never gave up on his Marxist  (Trotskyst) convictions,  but was open to new ideas and movements :  feminism,  anti-racism,  ecology.  He contributed to the adoption of ecosocialism by the New Anticapitalist Party and the Fourth International.

Let us salute his memory with the words of Joe Hill,  the IWW artist executed by the American ruling class :  « Dont mourn,  organize ! ».